What is supposed to be a disturbing thriller about fantasies and the male libido getting the better of three men, The Babysitter never gets going and ends up pointless and unpleasant. The only thing of value The Babysitter has is Alicia Silverstone in the lead to pique interest, otherwise it’s a tawdry and deeply ineffective movie that is one to steer clear of.

Beautiful teenager Jennifer is hired by Harry Tucker and his wife to babysit their three young children while they go to a party. 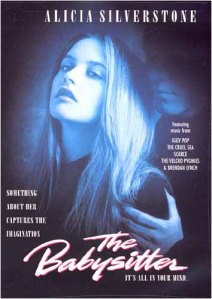 It looks like it’s going to be just like any other night for Jennifer, but she’s wrong. She doesn’t quite realise the way  that her beauty captures the attentions of men and how dangerous it could be. The first man to fantasize about her is Harry, who makes a fool of himself at the part he’s going to. The other two are both ex-boyfriends of Jennifer’s, Jack and Mark, though they are entirely different as Jack is the seemingly quieter one and Mark is a troublemaker. Jack was dumped by Jennifer after he kept asking her for sex when she wasn’t ready and Mark who had a brief relationship with her still has erotic longings for her. With nothing for both boys to do, they get drunk, smoke weed and decide to pay the unsuspecting Jennifer a visit. Yet for all three men, the racy fantasies they dream up about the gorgeous beauty Jennifer begin to melt with the real world with dark implications for all.

Forgettable is the order of the day with The Babysitter, which as I’m writing this review is getting harder to remember because of the lack of quality it had. What could have been a cautionary tale of not acting upon desires is turned into a squalid nightmare that can’t be redeemed. 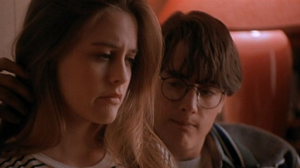 Guy Ferland, along with his uninspired and less than stellar direction, don’t take a decent enough stand on the issues it tries to present, ultimately The Babysitter becomes nasty and veers close to being a perverted film. The various fantasy sequences revolving around the somewhat naive Jennifer become increasingly disturbing as the movie goes on but because of how they’re shot, they are overly salacious and only add to the sleazy overtones of the picture. And though this film is supposed to be a thriller about a lack of morality when desire gets out of hand, no suspense can be gleaned from the experience. If the film was aiming to be eye-opening and strange it failed heavily on both counts. A seriously erratic music score veers all over the map, and not in a good way it must be stated.

The one thing that really establishes any redeeming qualities in The Babysitter is Alicia Silverstone. 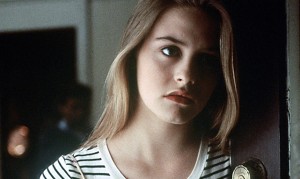 She appears so natural and believable as the teenager who is almost oblivious to her own beauty and the impact it has on men. The acting from Silverstone is the one piece of acting that is remotely interesting to which as she shows the unexpected allure of a girl unprepared for what is to happen. As the three men whose fantasies get way out of hand, Jeremy London, Nicky Katt, and J.T. Walsh add nothing more to the threadbare story. It’s clearly Silverstone who stands out here, then again with the horrible acting surrounding her, that’s not really saying much.

A tired exercise of a film that falls down in almost every department there is, The Babysitter is simply poor film making that is best left on the shelf. It’s little wonder this film went straight to DVD and the only thing I can thank The Babysitter for is being a short film so my boredom would soon be over.

23 thoughts on “The Babysitter”