An impressively witty period comedy that takes a largely underrated Jane Austen tale and showcases a naughtiness that is something different from her usual stories, Love & Friendship weaves a cunning and thoroughly amusing tale of one woman’s plot to maintain her position in society, no matter what the cost. Trust me, this is one of the funniest films I’ve seen in a while.

The setting is England in the 1790’s and Lady Susan Vernon is a widow. Occupying a precarious position in the class system since her late husband’s death and known for being a flirt with a bad reputation, we open with Susan leaving one home in which she has created chaos.

She invites herself to stay at her in-laws; her brother-in-law Charles who is more than happy to oblige, his wife Catherine, who cottons onto Susan’s ways and her brother the dashing and much younger Reginald. Susan, though trying to lay low as rumours spread of her indiscretions, is armed with a cunning plan while at the country home to ensnare a husband for her daughter and naturally herself. She finds that young Reginald, despite his initial reservations about her, has become enamoured with her which opens up an avenue of success. For her daughter, Susan has a candidate in the shape of Sir James Martin, who has a large fortune but little intellect.

Her schemes begin to take effect, aided in no small part by her trusted confidante Alicia Johnson, who helps her best friend despite knowing that she could be reprimanded and sent back to America by her husband if she doesn’t sever ties with Susan. Yet when Frederica, who is significantly nicer and more shy than her mother, runs away from school and arrives at the country house, Susan’s plans begin to go pear-shaped as her shy daughter has no inkling to marry and is instead smitten with Reginald. It seems all the spinning of webs by the crafty Lady Susan is about to get a lot more complex than intended.

Love & Friendship takes its basis from a Jane Austen novella that was published posthumously, but thought to have been written well before her more famous later work, the likes of which have been adapted countless times for movies and television. Whit Stillman effortlessly brings the not so well-known story to the screen with aplomb and vigour. His direction is unfussy yet immersive; focusing mainly on the schemes and plots of the tale rather than being overrun by period splendour and pomposity. Saying that, costume design and set decoration is stupendously done and is worthy of all the praise it should get. 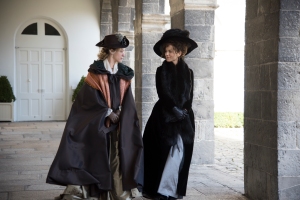 Thankfully, both elements of direction and decoration are supported on equally good footing, never letting one override the other and bringing out the period setting while reveling in a certain modernity to be found. One of these modern touches that was very funny was intertitles that introduced the characters and highlighted their motives, such a simple touch added a whole lot to the overall product. The ace in the pack of Love & Friendship is the script, that is as sharp as a rapier and unearths a sauciness rarely glimpsed in anything based on Austen’s material. Who knew something from the pen of Jane Austen could be so tart, cunning and cutting in the most delicious way? Well I for one loved seeing this different side to it and Stillman’s script captures the biting humour to a very excellent degree. A classical score that appears light and almost cosy acts as an ironic counterpart to Susan’s navigation and plots for those around her.

Where Love & Friendship really scores high points is in the casting and the respective performances.

In the lead role of the cunning yet seriously charming Lady Susan, Kate Beckinsale shines in what is her best performance to date. Beckinsale just has such zeal and devilish delight in the part that it’s hard to resist. The character of Lady Susan has no really redeeming features as she schemes away and has no moral compass; but there is something so likable about her that we fall under the spell of her, much like every other character does. Delivering pithy put downs, breaking hearts or explaining away any blame put on her, Kate Beckinsale fits the part of the manipulative Susan like a glove with her kittenish glee and delightful sauciness. Chloë Sevigny plays excellently against Beckinsale as her confidante who bored with her life is more than willing to listen into her scandalous plans for others and the danger of it all. Possessing both the good looks and the curious temperament, Xavier Samuel is very well cast as Reginald, who falls for Lady Susan’s feminine wiles despite his better judgement. Morfydd Clark contributes a gentle and sweet demeanor to the part of Frederica, who has no intention of following her mother’s manipulations in getting a husband. As the bemused in-laws of Lady Susan, Emma Greenwell as the suspicious wife and Justin Edwards as her husband that lets everything run its course are suitably great in their parts. Stealing the scene whenever he is present is Tom Bennett as the rich James Martin, whose financial wealth is not matched by his simple outlook and lack of knowledge.

He gets to say so many hysterical lines that you can’t help but laugh yet feel a bit of sympathy for the character, due in no small part because of Bennett’s winning comic timing. James Fleet and Jemma Redgrave in the supporting roles of Reginald and Catherine’s parents have a ball with what they are given and there is a funny cameo from Stephen Fry as Alicia’s older, disapproving husband.

Filled with fine acting, quick pacing and amusing exchanges, Love & Friendship is a film that is impossible to not be charmed and won over by. I genuinely cannot remember having so much fun watching a film in the cinema of late like I did when watching the witty Love & Friendship.