I’ve just read the news of the death of musical legend Prince at the age of 57. I’m am so shocked by this news. Prince was a real icon of music who burned himself into pop culture. With his mastery of instruments, massive voice, outrageous dress sense and button-pushing lyrics, he was one in a million. A true visionary who did things his way and crossed genres with finesse and style. I’m choosing to remember the amazing talent of this man, despite the sadness. Prince will be missed for his superb talent.

A chilling thriller that takes a satiric aim at men’s controlling desire to dominate women, conformity and perfection, The Stepford Wives is a well-directed and unusual film that engages on many levels.

Joanna Eberhart is a young wife and aspiring photographer who moves with her husband Walter and two daughters from bustling New York to the quiet suburb of Stepford, Connecticut. The place looks idyllic and nice, but something about it sets Joanna on edge.

In particular, the womenfolk of the town are all well-dressed, completely submissive to their husbands and obsessed with household chores like cooking and ironing in a most unnatural way. For the nonconformist in Joanna, this alarms her as her ideas are completely at odds with the other women who seem to do anything and everything to please their spouses. Adding more to her concern about the residents and town itself  is Walter joining the Men’s Association, that is incredibly secretive and headed by the menacing businessman Dale, who is more commonly referred to as Diz. Shortly after moving in, Walter begins to grow very distant and more and more involved with the Association, much to Joanna’s dismay. Thankfully, Joanna finds a friend and kindred spirit in one of the most recent residents of Stepford who isn’t a robotic housewife; the talkative and free-thinking Bobbie Markowe, who also thinks that the town and the subservient, cooking obsessed women are a little too perfect and not quite right. Working together due to their shared feelings of uneasiness, the two women investigate the mystery surrounding the seemingly lovely town and dig into how the Men’s Association is involved. They plan to expose what strange events are lurking and have turned all of the women into carbon copies of each other,  before they too become just like the wives of the town. Let’s just say that events get increasingly disturbing.

In the role of director, Bryan Forbes fleshes out the creepy and scathing tale of individuality under threat and traditional gender roles. The film really structures the unusual findings and too good to be true appearance of the eponymous town to great effect. Forbes employs a measured pace that allows the creepiness to sink in and take us with it, much like the way Joanna and Bobbie feel as they delve deeper into the strange yet picturesque town.

At first, The Stepford Wives lulls us into a false sense of security, then it slowly pulls the rug from under us as Joanna sees that the town is a very sinister place with unusual goings on. While The Stepford Wives is very much a thriller, it has a biting overtone of acerbic attack in the way it examines the themes of gender dominance and society’s need to have everything presentable. A bright cinematography is used throughout that counteracts the seeming idyllic nature of Stepford with the darkness the lies just below the all too perfect surface. The same can be said of the music, which begins lilting and calm before slowly giving rise to suspense and shock as Joanna fights to survive.

Katharine Ross is splendidly cast as the shocked and alarmed Joanna, who finds that she must fight to retain her individuality before it is too late. 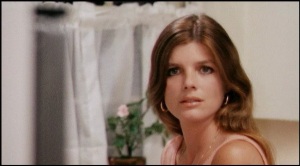 Ross has the right amount of pluck, spirit and strength for the part and she does it extremely well. Paula Prentiss is just as good as the rebellious and very helpful Bobbie, who along with Joanna is practically the only woman not affected by the strange cases of utter perfection and subservience. Peter Masterson is on edge and very shifty as Joanna’s spouse who begins to act very cold towards his wife right around the time he joins the secretive Association. Nanette Newman absolutely embodies the role of one of the drone-like women who make up the town and are constantly obsessed with pleasing their spouses with chilling preciseness. Tina Louise plays the role of one of the women who originally seems fine but is eventually doomed to become just like all the other wives after a ‘weekend vacation’. Patrick O’Neal has the necessary sliminess and menace for the role of the mysterious Diz, who seems to hold sway over many of the things in the town.

By turns disturbing and satirical, The Stepford Wives knows exactly what buttons to press to induce a creepy feeling of uneasiness and explore the themes it presents with an acidic eye.