The dark forces of the Devil comes to a small town with malice in mind in this sadly sub par adaptation of the Stephen King book. It has a lot of promise and at least the actors keep you watching, but falters deeply because of how uneven it is , a long time and how it can’t decide on what kind of movie it wants to be.

The quiet and sleepy town of Castle Rock is changed when one day a mysterious man arrives. 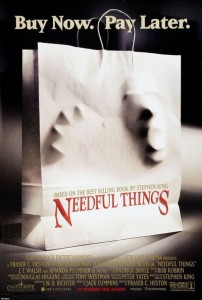 The man in question is Leland Gaunt; a sardonic and seemingly benevolent older man who sets about opening a shop. This shop, given the name Needful Things, is a cornucopia of objects that hold deeper  promise with the residents than they realise. As people flock to the shop, the objects seem to be just unusually perfect for each and every person as if expertly picked out for their personal longings. But Gaunt is not interested in making a profit of his stock as he charges ridiculously low prices for his produce. Instead, the crafty man has his customers play tricks on others as a way to pay him back. At first, the playful pranks are somewhat amusing but as time goes on they morph into much darker deeds. This arouses the suspicions of the decent Sheriff Alan Pangborn, who seems to be the only person able to resist the allure of the shop that promises wonders to every resident of Castle Rock. Bewildered by the events surrounding him, he digs into the past of Gaunt and discovers that he may not be human at all.

As the town is torn apart by violence, murder and unrest, it is up to Alan to bring down Gaunt, who is enjoying manipulating the ordinary people of the town into shocking acts of horror and carnage, all for the desired trinkets he entices them with.

Needful Things is one of those movies that has some good ideas but can’t quite put them across successfully on the screen. The main fault lies with the direction from Fraser C. Heston. He can’t quite make his mind up on whether he wants Needful Things to be a grisly supernatural horror or a fantasy stuffed with black comedy. There are only a few moments that really work in the film, but the rest is not thrilling, scary or darkly amusing in the slightest. The story itself could have been extremely intriguing with the subject of what people are willing to do when tempted by their heart’s desire, but a weakly written script stops any chance of that. Which brings me on to the next flaw which is the pace and running time. Now I don’t mind long movies as long as they keep me entertained, sadly Needful Things drags like a snail and becomes something of a chore to view. Everything about this movie just seems to take way too long to get going and when it does, it is too late to make up for the flaws in pacing. The score which does bring something of a fiendish quality to the dark events provides at least some sense of tone, yet it feels overly bombastic and doesn’t gel with the story.

The one thing that shines in Needful Things and stops you from switching the movie off is the cast assembled. As the devil in disguise whose benevolent demeanor and welcoming air entices curious customers to their doom, Max Von Sydow is obviously having a good time. And it must be said he contributes a charming but very sinister presence to the film that brings at least some effectiveness to proceedings. 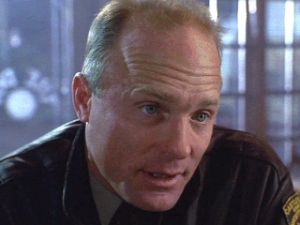 Ed Harris is very good( then again, when isn’t Ed Harris good?) as the honest but firm Sheriff who is the first to see the wicked game being played by Gaunt. It is then up to him to prevent further destruction as he goes up against the devil incarnate. Bonnie Bedelia does just fine in an underwritten role as the love interest, bringing just the right amount of sweetness to the part to cover up how undeveloped the character is. Then there is J. T. Walsh, quite effective as the slime ball boat salesman who gets his comeuppance by becoming the loyal servant of Gaunt. 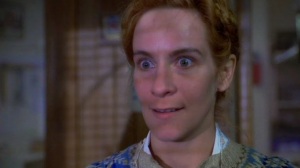 Standing out in the cast is Amanda Plummer, all nervous tics and wide eyes as the kooky but vulnerable baker Nettie, whose good nature is turned to murderous rage. She isn’t in the film for long, but she makes an impact on it and lends some creepiness to this film that is devoid of it. As the 11-year-old kid who is the first to encounter the evil of Gaunt, Shane Meier does a credible job at showing how his innocence is ultimately manipulated into something darker.

Neither particularly scary or engaging, it’s only a commendable cast that keeps Needful Things afloat. And even with the talented cast, it isn’t enough to make a great movie and sadly it becomes one of the not so good King adaptations.