A taut and well shot horror-thriller, Vacancy eschews over the top gore in favour of well-timed shocks and nail-biting suspense. It may not fully escape B movie origins but it’s definitely a step up from some of the horror movies due to the building of terror and the efficiency of its running time.

On the way back from a family get together, estranged couple Amy and James Fox take a short cut due to an accident in the way of their intended destination. 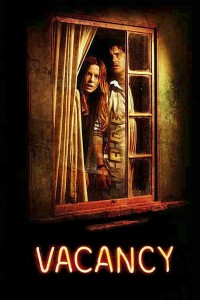 The couple is on the cusp of divorce after the tragic death of their young son and the two of them being unable to repair the wound it left. As they continue driving in the night, their car breaks down as they find themselves completely lost. Journeying back on foot after seeing a motel earlier in their travels,  Amy and David check into the place for the night, despite their initial reservations about the unusual manager Mason. While attempting to rest and with David trying to get through to Amy, it looks as if it will be a long night for the both of them. Yet events become a whole lot more creepy and deeply perverse as knocks at the door and an alarming discovery is made. The dingy motel room that they are staying in is the ground for the making of snuff movies, filled with hidden cameras.

The motel manager Mason is the ringleader of the sickening games and has a group of masked assailants who he sends to torment Amy and David. Utterly terrified by what is happening, Amy and David must put their personal problems on the back burner as they fight for survival against a disturbing band of psychopaths whose every thrill is the squirming of the couple. As the night goes on and the terrified couple battle with all they have against deadly and sickeningly planned designs, it’s down to the wire as to whether they can make it until morning without becoming the victims of the next snuff movie.

Nimród Antal successfully builds a sense of dread from the very first frame and then quickens the pace with unbearable tension once David and Amy discover the horrifying purpose of the motel. The running time is thankfully not long-winded and throws us into the terrifying night that the couple faces after checking in. Antal wisely sidesteps the temptation to overuse the sleazy premise that many other film makers would indulge in. Sure, Vacancy shows brief snippets of the perverse horror that the motel is used for and violence, but these moments largely occur off-screen, which in my view makes the film more  creepy because we are forced to imagine the brutal extent of what is happening.

Antal crafts so many scenes of merciless suspense and tension; a clear highlight being David and Amy having to quickly crawl through a series of underground tunnels used by the killers to quickly make their way between rooms as they are pursued. Low lighting and moody cinematography create an ambience of squalor and desperation as the couple fights to live on within the confines of the scuzzy motel. Vacancy only slightly falters due to some laughable dialogue that feels a bit out-of-place in this kind of film. Yet this is the only real flaw as the script is largely successful in setting up the terror and crafting two believable and flawed protagonists who we get to know and want them to survive this utter depravity that has trapped them.  A nail-biting and extremely tense score keeps the economical running time of the movie going along with an electronic bass that from the very beginning lets us know that something ominous will soon occur.

In the roles of the protagonists who are dealing with their own stress and trauma even before the hellish night of horrors that awaits them occurs, Kate Beckinsale and Luke Wilson are very good.

They put across the feeling of these two wounded people trying to navigate grief in their own way, but being forced to forget about it and fight with every fibre of their being they have to survive. The two conjure the emotions of normal people pushed to their limits under emotional distress and doing whatever it takes to live on very effectively and with palpable skill. As the mastermind behind the snuff film plot, Frank Whaley has all the necessary sleaziness and creepy tics needed to make the character a despicable psychopath delighting in the suffering of others. In another villainous role that is somewhat brief, Ethan Embry plays a mechanic who supposedly helps the couple, but is in fact in on the sickening scheme.

Tight, taut and well paced, Vacancy is an effective blend of horror and thriller that is disquieting in a way that isn’t gratuitous or in your face, instead emerging as more of a creepy and suspenseful chiller.