The Hobbit: The Battle of the Five Armies

As the concluding part of The Hobbit trilogy, The Battle of the Five Armies is a successful last chapter and in my view the best of the Hobbit movies. Exciting, tense yet human in many ways, it’s a rousing finale that definitely captures the attention.

We begin this final slice of Middle Earth adventure were the last one left off. Having reaching the Lonely Mountain, Bilbo and the dwarf crew accidentally woke the vicious dragon Smaug from slumber. 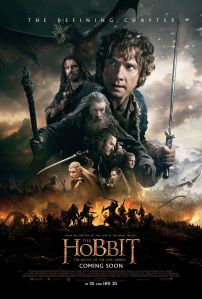 The fire-breathing creature leafs the confines of the kingdom and angrily heads to the adjoining Laketown, which he sets about destroying. What is left of the people flee the desolated town, but Bard sets about ridding the place of Smaug and succeeds by firing a makeshift arrow that ultimately kills the dragon. Yet even though Smaug is gone, there is still unrest and panic as the people look to the dwarves for help because of a promise made by Thorin to share in some of the gold within the mountain. The Woodland Elves, lead by the ruthless Thranduil, also have business with the dwarves as there is a collection of jewels he wishes to acquire. But Thorin is in no mind to listen Ashe slowly succumbs to dragon sickness, which clouds his judgement and eats himself up with greed.

Bilbo begins to see how this is going to be a tough time as Thranduil declares war along with men on the dwarves for going back on their promise. Plans for war among them are quickly questioned when Gandalf returns after discovering that the spirit of the dark lord Sauron has returned and that an Orc army is heading their way. It is then left to the elves, dwarves and men to decide whether to unite or be divided. They’ll have to make a choice soon as word, thanks to elves Legolas and Tauriel filters through that it isn’t just one army of orcs, but two that are heading to spread darkness across Middle Earth. For Bilbo and the others, it is time to face the ultimate battle of their lives.

What is immediately striking about The Battle of the Five Armies is the efficient running time. Often with last parts of trilogies or Film series, there is a temptation to make things very long-winded and drawn out. Thankfully, Peter Jackson and his stunning direction keep events ticking over nicely and wrap things up with style, not allowing any loose ends or flab to drag the movie down into boredom. On a visual level and an excitement one, The Battle of the Five Armies is the best of the Hobbit movies.

The battles are orchestrated with such precision and depth that gives it something else that the other two movies lack, which is a heart. Emotions run very high and the movie alternates between fun, tense and tragic in the space of mere minutes, which is excellent. And thank goodness for the decision to use CGI wisely and not overindulge in it. Set pieces are of a particularly high standard, with special mention to Smaug destroying Laketown and the two battles that form the backbone of the movie. It’s fantasy with a sense of emotion and passion that comes off remarkably well thanks to the wonderful direction and imagery. I liked how the films wrapped up the saga of Middle Earth and helped events come full circle in the end. A thundering Howard Shore score is the perfect sonic companion to the film, peaking with epic scope and emotional heights.

Martin Freeman has really grown into the role of Bilbo and is once again excellent in an understated way. He never overplays his scenes, instead relying on subtlety to show us the brave heart and occasional wrestling with conscience that he must endure. As good as Freeman is, this movie belongs to Richard Armitage.

Portraying Thorin as blinded by his sickness and full of tragic greed, he brings out the fact that he is a good king underneath it all and it is really good when he snaps out of his sickness and leads his crew into battle with inspiration. Ian McKellen is reliably wonderful as the powerful and sagacious Gandalf, who knows of the dark tide beginning to turn. Orlando Bloom imbues Legolas with a gracefulness that belies his capacity for battle and stands him in good stead when he takes part.

Evangeline Lilly is tough yet very luminous Tauriel, whose heart belongs to Kíli and who can more than handle herself when confronted with the violence unleashed on Middle Earth. I liked how Lee Pace as Thranduil, remote king of the elves expanded upon his character to show why he is so cold and unfeeling towards others. Luke Evans has that every man quality about him that makes him the voice of the people portraying the proud Bard, while Aidan Turner is touching as the stout-hearted dwarf Kíli. Dean O’Gorman and Ken Stott flesh out the parts of two of the more prominent members of Thorin’s company. Benedict Cumberbatch utilizes his commanding voice to give life to the fierce and very dangerous Smaug, whose opening attack on Laketown is a killer set piece. Some comic relief comes from Billy Connolly as Dáin,Thorin’s irascible cousin who comes to his aid in the epic battle sweeping the lands. Cameos come from Hugo Weaving, Christopher Lee, Ian Holm and Cate Blanchett and suffice to say, they’re all very good as characters we are familiar with within the landscapes of the movies. Plus they all take part in an exhilarating conflict with the forces of Sauron which is a very good part of the movie.

With emotional heft and magical prowess, The Battle of the Five Armies is a well crafted last entry to the saga that is wholly satisfying from beginning to end. 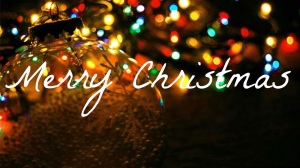 It’s now Christmas Eve and I’m ridiculously excited for Christmas. As it is nearing the end of the year, I want to take this opportunity to thank all of my wonderful followers. Your constructive comments, love and support is what keeps me going on my blog and I’m forever in debt to you all. This is my Christmas message to all of you; may you all have the best time tomorrow and may all your wishes come true. Merry Christmas everyone and here’s to a magical 2016.