This post is part of a blogathon orchestrated by the amazing Jordan Dodd. It is to showcase the outstanding work of the late Philip Seymour Hoffman. For me, he was an acting chameleon who could shift into any genre or any character no matter what.  The performance of his that I’ve chosen to highlight is in Along Came Polly.

Along Came Polly is a film I really don’t like, it just isn’t my kind of movie at all. The focus is meant to be on Ben Stiller overcoming his wife cheating on him by beginning to date kooky Jennifer Aniston. As a film, it is weak and unconvincing but the one good thing in it is Philip Seymour Hoffman. He portrays Stiller’s best friend Sandy Lyle, a former child star who is past it but still holding onto the glory of his youth. 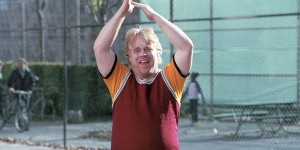 Hoffman just brings so much enjoyable energy, geeky charm and one-liners to the part. His basketball scene in which he showcases his inability to score a single shot is hysterically funny to watch and his call for timeout is a hoot. His impassioned speech to Stiller’s colleagues after he has to step in is filled with deep humour and gift. He tries to make a comeback in Jesus Christ Superstar and still thinks the whole play is featured on him. Even though the part is supposed to just be the witty sidekick to Stiller, Hoffman makes it much more than that with hysterical results. I really can’t fault Hoffman in this film as he takes what is a really bad movie and gives it something memorable. I think I still quote certain phrases from his character here, such as “Let it rain”.

Thanks for this opportunity to do this Jordan. I really enjoyed highlighting the great work of Hoffman and this blogathon is really neat. Everyone please check out Jordan’s amazing and insightful blog as you will not regret it.

A disturbing and unsettling horror film given a personal slant because of what director David Cronenberg had been going through, The Brood will frighten you as well as leave you with questions because of the strange impact it has.

The eccentric and questionable Dr. Hal Raglan has found an unusual way to treat his disturbed patients. The treatment literally allows the patient to manifest their pain, anger and frustration as various bodily effects like legions, bumps and blisters. 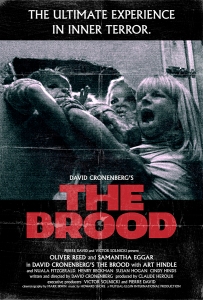 He is in the process of treating Nola Carveth, who has suffered some sort of breakdown while being locked in an acrimonious custody battle with her estranged husband Frank for their five-year-old daughter Candice. Raglan sees Nola as one of his star patients and believes his treatments are working as he begins to break down the defensive barriers she puts up because of incidents in her past. Yet Frank is not so convinced and certain events like the discovery of bruises on his daughter’s back after visiting her mother, lead him to believe that Nola is behind this and that the treatment is having a dangerous impact on those subjected to it. Yet while the confused Frank is trying to piece together this puzzle, a series of grisly murders are committed by what appears to be a swarm of disfigured dwarves on those that have hurt Nola in the past adding further mystery and terror to the mix. 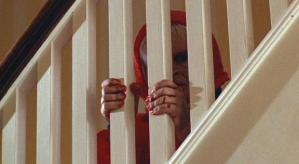 As he digs deeper, he makes a shocking discovery that leads him back to his wife and the treatment while trying to protect his young daughter caught in the middle of it all and open to the threat of the eponymous brood.

David Cronenberg infuses The Brood with a personal stamp, seemingly influenced by the divorce he was going through at the time. The Brood may derive its horror from the grisly murders and unusual bodily treatments, but a lot of the horror comes from the themes of divorce and the impact of it on those surrounding it, mainly the young daughter. Cronenberg paces the film very well as we build up to the hellish revelations of dubious psychology and the morphing of ones body into its own entity of rage and hate. There are times when the pace becomes too glacial for its own good and the sheer strangeness of the film threatens to overpower, but it just keeps the right amount of mystery, terror and freaky goings on to keep you interested and invested in this disturbing tale. 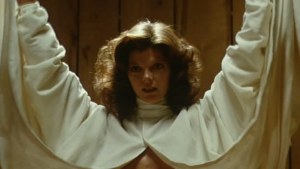 A quick warning for anyone thinking of watching The Brood, it is not a film for everyone and if you have a weak stomach, you might want to look away as things get particularly grisly as the film goes on.While subtlety is not exactly the film’s strong suit, I was interested in how it built up to the horror rather than just had it from the first frame. 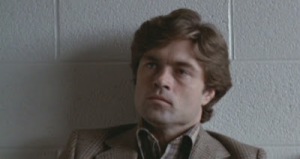 With this, we do get a sense of mystery as we assume the role of Frank, trying to discover the extent of Raglan’s treatment. And while there is gore( specifically in the last half an hour when things boil over) , it feels more controlled and gives it an unexpected jolt of terror rather than having a detrimental effect on the story. While some of the special effects are a little dated, many of them surprisingly hold up very well, especially in the case of the murderous brood of the title. Howard Shore provides an eerie score of slashing strings and reverberating menace that adds yet another layer of power to the disturbing events that begin to unfold.

Oliver Reed is oiliness personified as the ambitious yet eccentric psychologist with the unusual treatments that lead to inevitable terror and destruction. 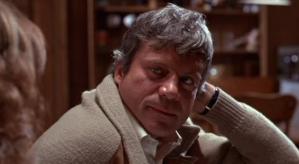 Just watching his methods of treatment and his refusal to stop is chilling indeed as he doesn’t see the grisly impact it will have on other people. Samantha Eggar sends shivers down the spine as the disturbed Nola, bringing forth an intense, wild-eyed performance that is hard to forget. Nola is the main catalyst of the story with her deep-seated anxieties boiling over into rage and Eggar makes the character an unforgettable creation. Art Hindle makes the most of the part of Frank, and exudes the confusion and tenacity of a man trying to piece together a disturbing set of events and protect his young daughter from harm. Cindy Hinds plays the traumatised child very well and really is emotionally convincing in this disturbing film.

Deeply unsettling and stomach-churning, The Brood is a whole bunch of horror rolled into a package that also functions as something of a drama too thanks to the impact of Cronenberg’s connection to the tale.