A mesmerising and lyrical movie of many different interpretations, Walkabout is a film that will stay in your mind for a long time due to its visuals, experimental style and vast array of themes.

An unnamed teenage schoolgirl and her younger brother living in Australia. Their father one day takes them into the desert for what is supposed to be a picnic. He then goes berserk and begins shooting at his children who manage to hide behind rocks. The father then burns his car and shoots himself in the head.

The girl shields her brother from the truth and takes him deeper into the outback with only a few supplies. After much travelling through the wilderness and barely surviving due to dehydration and starvation, they come across an Aborigine who is in the middle of Walkabout. According to the tradition, it is the separation from the tribe in which a young man must fend for himself to become a man. Although he doesn’t speak a word of English and the girl has no patience, her brother manages to at least get their points across through noises and various signs. The Aborigine takes them on his journey and they hope back to civilisation. As they travel further, none of them realise how much this moment will change their lives forever.

Nicolas Roeg is a master of the camera and his skills are on full display here. He creates a dazzling yet dangerous landscape that these characters must survive in and shoots it with unusual lenses and takes. Images overlap for a dreamlike effect, zooms into the natural but harsh beauty of the wilderness are heavily featured and choppy inter cutting between civilisation and primitive means of living. All of these give Walkabout a hypnotic pulse of ambiguity and elusiveness. Sparse on dialogue but heavy on awe-inspiring imagery, Walkabout holds symbolic meanings and subtext that are impossible to miss.

What is most impressive is the use of juxtaposition; especially the Aborigine killing prey inter cut with a butcher slicing meat. By using these techniques, Roeg weaves a film that engages your senses but also your brain. At first glance, the movie could simply be taken as a traditional fish out of water story. But by delving deeper into Roeg’s masterful tapestry, the story is actually quite complex and leaves you with a lot of questions. Do these children, with their manners and English reserve, have what it takes to survive the harsh desert? Are we that different from our scavenging and hunting ancestors? Has civility eroded away our chance to survive in a place we are unfamiliar with? That is the beauty and power of Walkabout, there are no easy answers to it. On one hand it seems to be something of a coming of age story but also a drama about the difference in cultures because of background and upbringing. There is a definite erotic pulse to Walkabout in its examination of the girl and the Aborigine’s relationship.

Jenny Agutter is delightfully good as the unnamed girl, who finds that her prim and proper upbringing are useless in this place. 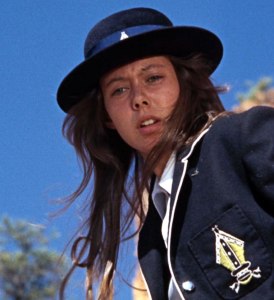 Taking on the role of protector of her brother and the part of the grownup since their father left them to fend for themselves, Agutter’s soulful eyes give voice to her character when she doesn’t speak and shows us the hardship of these tasks and her crucial but unintentional misunderstanding of their Aborigine guide. Lucien John, who in real life is Nicolas Roeg’s son, despite having no acting experience gives the role of the brother wide-eyed wonder, childish adventure and open-mouthed awe. David Gulpilil although barely speaking a word brings joy for living, the need to survive and the tradition of his ancestors to his part and delivers exceptional work.

A haunting, unusual and multi-dimensional movie, Nicolas Roeg’s Walkabout is a hard film to forget.