After Roger Moore signed off with the underwhelming A View to a Kill, the Bond producers went on the lookout for a new actor to step into the shoes of 007. The eventual casting choice was Timothy Dalton, who brought to the role a gritty quality that was more in tune with the hero of Ian Fleming’s novels. The Living Daylights is a refreshingly grounded spy thriller that brought the series back to its roots and generally succeeded in bringing the franchise into the realms of believable espionage.

Bond is sent to aid the defection of KGB officer General Georgi Koskov along with the by the book Saunders. Koskov believes he has been marked for death and that a sniper will eliminate him if he attempts to defect during a concert in Bratislava. Bond helps him and manages to avert the sniper, who is a beautiful woman that Bond thinks is not in on the plot. 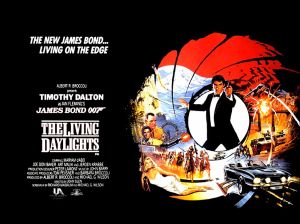 Koskov informs MI6 that the man behind all of this is the KGB chief General Pushkin. Yet there is something about the accusation that alarms Bond and arouses his suspicions. After aiding Koskov, the defector is snatched back by Necros, a menacing assassin. While MI6 begins panicking about the repercussions of this, Bond has already smelt a rat. He deduces that Koskov cunningly faked his defection, tried to implicate Pushkin and is in league with a maniacal arms dealer named Brad Whitaker. Travelling back to Bratislava, 007 comes into contact with the girl with the sniper, Kara Milovy. She is in fact the naive, cello playing girlfriend of Koskov, who has no idea about the sinister plans surrounding her and believed she was helping Koskov.

It is now up to Bond to stop Koskov and Whitaker from a scheme involving diamonds, opium and arms dealing. From Vienna to Tangier and finally Afghanistan for one hell of a showdown, Bond must use all his wits if he is to stop this plot from falling into motion. With the confused but willing Kara in tow and assistance from Kamran Shah, an Afghan freedom fighter, 007 enters the international game of cat and mouse.

After the humour of the Moore era, it was refreshing to bring a seriousness to the Bond series. The Living Daylights more than does this by giving us an atmosphere of intense intrigue, that has shadows of Cold War thrillers with defections, double crosses and death at every corner. John Glen is back to his best in this effort, directing with a grit and globe-trotting appeal. Unlike the last film, which had an emphasis on comedy, Glen manages to control the humour to splashes of quick wit and sophistication. Only at certain times does the complex plot become a little too complicated for its own good, yet The Living Daylights still remains enthralling. 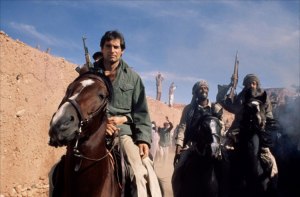 The action is high and excellently choreographed, the attack on a Russian air base in Afghanistan is an exciting battle that has the hairs on your neck standing up. John Barry signs off with panache by contributing an enthralling and intriguing score that ranks as some of his best work. The title song by A-Ha is a catchy track that incorporates synths and orchestra to compliment the modern elements and the tradition of the Bond series.

Timothy Dalton gives the character of Bond a serious edge and exudes some real intensity as he investigates this complex state of affairs. He may not have the wit for the part, but Dalton makes the role his own with his darker take on the character. Maryam d’Abo is suitably winsome and naive as Kara, who is thrust into these extraordinary situations.

d’Abo brings a certain charm and benevolent innocence to the part of Kara, and this proves to be interesting as we watch this ordinary woman fall into these circumstances and into the arms of Bond. Unusually for a Bond movie, he isn’t that much of a womanizer and Kara is the only Bond girl. This makes the relationship between him and Kara natural and strangely effective. Jeroen Krabbé may nail the smarmy personality of the double-crossing Koskov, but at times he appears a little to phony to be believable and as a villain, he doesn’t quite have the intimidation needed. Joe Don Baker has the right qualities for a maniacal villain in the form of Whitaker, but he comes off as more than a little cartoonish. John Rhys-Davies is on fine form as the newest KGB chief Pushkin, he gives him a humour and sagacity that aids Bond in uncovering deception. Art Malik is resourceful and witty as Kamran Shah, the freedom fighter who is freed from prison by Bond and repays the favor. By far the most menacing of the trio of villains, Andreas Wisniewski utilities his height and athletic appearance to great effect as master assassin Necros. Thomas Wheatley has fun as the strict and rule abiding agent Saunders, flabbergasted by Bond’s methods who later comes to respect him. Robert Brown as MI6 boss M and Desmond Llewelyn give their usual expertise to their roles, but the new Moneypenny, in the form of Caroline Bliss, is not a patch on Lois Maxwell.

An exciting, serious and down to earth spy thriller, The Living Daylights gives the series a real jolt and makes the ride extremely enjoyable announcing Timothy Dalton as a different kind of 007.

28 thoughts on “The Living Daylights”