Goldfinger is the third film in the Bond series and the one that represents the iconic formula for enjoyment within the series that has lasted for over 50 years now. With outlandish villains, suggestively named girls, tongue in cheek one-liners and an eccentric plot not to mention some outrageous gadgets that would later become a staple of the movies, Goldfinger still ranks as one of Bond’s best adventures and a quintessential movie in general.

Goldfinger starts with 007 destroying a drugs lab in Latin America, before dispatching of a would be assassin by electrocuting him (leading to the classic line “Shocking, positively shocking”). 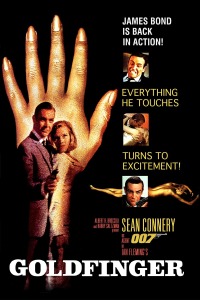 Vacationing in Miami, Bond is tasked by M with investigating gold magnate Auric Goldfinger, who is suspected of smuggling gold in various countries and has a deep obsession with gold. Bond attempts to infiltrate Goldfinger’s plans and this sends him from Geneva to America. Standing in his way is Goldfinger’s manservant Oddjob, who kills those in his master’s way by throwing his steel-rimmed bowler hat at their neck and the suggestively named Pussy Galore, a stunning woman with shifting loyalties and impressive judo skills. Bond soon uncovers the maniacal plot of the nefarious Goldfinger, which involves an attack on Fort Knox with evil intentions. It is up to Bond to stop Goldfinger from completing his elaborate scheme and an exciting spy romp follows with all the right ingredients for the Bond franchise.

As mentioned earlier, Goldfinger has a whole load of iconic moments that helped define the Bond franchise. From the henchman Oddjob, the first use of the now classic Aston Martin, Bond tied up and nearly killed by a deadly laser and a young woman’s death by being painted head to toe in gold after betraying the main villain, Goldfinger has it all. 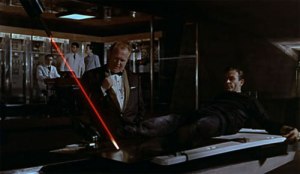 Guy Hamilton directs with sharp efficiency, carefully balancing the thrilling plot with a more tongue in cheek approach than Dr. No and From Russia With Love. The storyline and nefarious plot of the eponymous villain are gripping and bizarre in equal measure, with each complimenting the other interestingly. What gives Goldfinger that extra oomph is the gadgets that the lovable Q equips Bond with, the ejector seat in his car a humorous and very nifty gadget on Bond’s dangerous ventures. John Barry contributes an entertaining and bombastic score, heavy with the brass section that gives Goldfinger that iconic edge. And not forgetting the title song, sung with gusto and power by Shirley Bassey, with its slinking rhythms and trumpet riff that really adds to the excitement of the piece and compliments the sensual title sequence of lovelies lathered in gold and posing seductively.

Sean Connery turns in what is possibly his best performance as 007, perfectly suave, adroit with the cheeky one-liners and tough he finds the right mix to cement himself as the favourite actor of many to play the spy during its tenure. Gert Frobe makes an impression as the obsessed and unusual villain of the title, whose plan is one that will quench his greedy desire.

Honor Blackman is excellent as the seductive Pussy Galore who is tangled up in Goldfinger’s plot, but whose shifting loyalties make an impression on Bond. With her raunchy name and iconic entrance, Honor Blackman’s incarnation of Pussy Galore ranks her highly on my list of favourite Bond girls. Harold Sakata exudes menace as the henchman Oddjob, who is an incredibly strong adversary for Bond and loyal servant to Goldfinger. Shirley Eaton, although only on the screen for a short time playing Goldfinger’s aide who betrays him for Bond, enters the realms of iconic Bond moments with her gold painted death. The usual supporting players are excellent; Bernard Lee as the gruff M, Lois Maxwell as Miss Moneypenny and Desmond Llewelyn as gadget master Q, who supplies Bond with the souped up Aston Martin and wants it back in pristine condition(which of course he doesn’t get).

Effortlessly entertaining, exciting and endlessly thrilling from start to finish, Goldfinger is iconic James Bond at its golden and durable best.