Sleeping with the Enemy

It may not be a perfect entry into the thriller genre, but Sleeping with the Enemy sure has its moments of chilling suspense. Featuring Julia Roberts in a dramatic departure from her usual romantic comedies and competent direction, it remains a tense movie throughout.

Laura Burney is the beautiful young wife of Martin, a successful investment counsellor. They live in a nice house by the beach on Cape Cod and appear happy as a couple. Behind this image is the disturbing truth. Martin is an abusive and possessive husband, who regularly beats Laura and toys with her psychologically. Laura tries to please him but his abuse and extreme OCD become too much for her. Desperate to escape her traumatized life with Martin, Laura formulates a plan. Martin takes Laura on a boating trip on a night that soon becomes stormy so that his wife can overcome her fear of water. As the storm wreaks havoc on the boat, Laura seizes her opportunity and jumps overboard, in turn faking her death. We soon learn that she had been taking secret swimming lessons to enable her to escape. 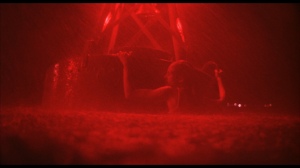 Laura swims to shore and grabs a cache of belongings before leaving. Relocating to Iowa, Laura lives under the name Sara Waters and tries to live her life again without the torment of Martin. She even manages to capture the eye of a Ben, a handsome drama teacher who lives next door. But Laura is still looking over her shoulder in case Martin realises the truth and attempts to find her. This fear soon becomes true as Martin puts two and two together and realises that his wife has faked her death. Seething with rage, Martin sets off after her in chilling fashion, hoping to find his spouse and reclaim her for good.

Joseph Ruben creates some scenes of chilling menace, especially in the beginning when we see Martin’s controlling ways and how he expects Laura to abide by them or else suffer his beatings. Through his camera, the beach house becomes a prison for Laura with the abusive Martin the person intent on keeping her caged in it.

These scenes of oppression are counteracted by Laura’s eventual freedom after her escape, captured in blazing sunlight and warm colours. Admittedly, the scenes after the initially tense half an hour don’t quite live up to the menace of the beginning. This is partly down to the relationship Laura forms with nice guy Ben. I know he is supposed to be the nice guy in all of this, but the film when it shows their blossoming relationship is too light for a film that deals with a tough subject matter. The later half of Sleeping with the Enemy does have it’s fair share of thriller clichés that become a little repetitive. Saying that, the evocative and suspenseful score provided keeps the tension up high and embodies the fear that Laura has that Martin will eventually find her again.

The relatively small cast is well assembled. Julia Roberts is emotionally convincing as the brutalised Laura, who discovers her buried inner strength and escapes from the torment of her husband. As a character, we feel sympathy and want her get away from the abuse, most of this is down to the finely judged performance of Julia Roberts, who really shows her mettle as well as an air of fragile vulnerability. Patrick Bergin is slimy and creepily effective as the controlling Martin, his tall, imposing figure and stern face really do send shivers down the spine as he realises that his wife is not dead. Bergin plays Martin as a sophisticated psychopath, seemingly charming on the outside but abusive and controlling behind closed doors. Kevin Anderson is saddled with the least memorable part as the charming Ben, although to be fair he does his best with the material he is given.

All in all, Sleeping with the Enemy has its share of uninspired moments and lapse into cornball melodrama, but the performances of Roberts and Bergin along with the taut direction ensure that the movie is at least memorable and at times unbearably tense to watch.

15 thoughts on “Sleeping with the Enemy”