A slice of creepy thriller from Hammer Horror, The Nanny is an unexpected and interesting addition to the studio’s work as it doesn’t have any supernatural elements but chills aplenty with the legendary Bette Davis on fine form.

The Nanny of the title works for the well off Fane family, consisting of strict father Bill, his nervous wife Virgie and their ten-year-old son Joey. 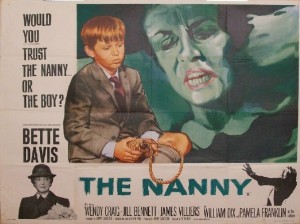 The family had a young daughter who drowned in the bath two years ago. The mischievous Joey was blamed for his sister’s death and many thought he was a dangerous young boy because of his previous history of lying and playing tricks on those around him. As the film begins, Joey is returning home from a hospital for mentally disturbed children, although the doctor warns of his increasingly troubled behaviour. Upon arriving back home, he immediately acts with hostility against Nanny; refusing to eat what she cooks, changing his room because she decorated it and being as unpleasant as he can when she is around him. His mother and father are baffled by this as Nanny seems to genuinely care for him and his wellbeing. Joey continues to spin tales about Nanny, yet no one listens to him because of his history of lying and scheming. No one believes him except his neighbour Bobby, a worldly teenager who lives in the apartment above his and often keeps the young boy company. Is Joey really disturbed or is he in fact right about the seemingly harmless Nanny? As different and conflicting points of view take centre stage, you’ll be left biting your nails trying to figure out the truth in this creepy and effective thriller.

Seth Holt provides interesting and intelligent direction by playing the first half an hour of the film as simple and innocuous, but steadily he pulls the rug from under your feet and gets you to question the events occurring and the validity of them. The crisp yet ominous use of black and white hints at the darkness that may lie beneath the surface of both Joey and Nanny, while roving camerawork takes in the supposed safety of home and reveals the creeping danger within its trappings. A sombre yet menacing score keeps the suspense building as the line between truth and fallacy blurs. Admittedly some of the plot elements creek a little with a lack of originality, but for most of The Nanny’s duration it keeps you riveted.

Bette Davis turns in a subtle performance as the eponymous Nanny and shows us the many sides to her with little nuances clouded with a hint of secrecy. Because of her amazing delivery, the audience is really left until the last-minute wondering whether Joey is right to be afraid of her. As seemingly kind and considerate as Nanny is, there is something uneasy about her character and as played by Davis we begin to question our judgement of her. William Dix is similarly effective as the young Joey, whose string of antics leaves others questioning whether he is lying or not. Dix manages to dig beneath the unpleasant exterior of the character and show fear and intelligence as he attempts to explain his story. Wendy Craig is suitably nervy and highly strung as Joey’s mother, while Jill Bennett provides quiet understanding as the Joey’s aunty who is frustrated by her nephew yet senses something isn’t right. James Villiers is somewhat wasted as Joey’s father and doesn’t really contribute much to the film. On the other hand, Pamela Franklin is precocious and loyal as Bobby, the neighbour who begins to believe Joey’s stories about Nanny.

A sinister and nail-biting watch, The Nanny is a creepy entry into Hammer Horror that boasts a chilling atmosphere and a compelling performance by Bette Davis.

9 thoughts on “The Nanny”