Season 2 of Buffy expands on the greatness of the short  Season 1 with interesting character arcs and writing. This is when the show really begins to hit its stride and capture the interest of viewers. Spoilers will follow in this review.

After dying at the hands of the Master and then being revived at the end of Season 1, Buffy(Sarah Michelle Gellar) returns to Sunnydale, feeling distant and alienated. It seems that the deadly experience between her and the Master has had a deep effect on her. Willow(Alyson Hannigan),Xander(Nicholas Brendon) and Cordelia(Charisma Carpenter) are concerned for their friend and try to help her snap out of this state. It’s only after they are kidnapped along with Giles(Anthony Stewart Head) in an attempt to resurrect the Master, that Buffy manages to snap out of it and rescue them from danger. Other characters arcs are Xander and Cordelia dating despite the social difference, Giles beginning to find happiness with Jenny and Willow entering into a relationship with Oz(Seth Green), who just happens to be a werewolf.  But darkness is just around the corner with the arrival of the sadistic vampires Spike(James Marsters) and Drusilla(Juliet Landau) who become the main antagonists for this season. To add to this, Buffy’s relationship with Angel(David Boreanaz) deepens. After declaring their love for one another and sleeping together, Angel loses his soul because he has experienced true happiness. The downside to this is that he now reverts back to the bloodthirsty Angelus and soon begins to torment Buffy and those closest to her. In the end Buffy must decide whether to follow her duty as slayer and kill Angel or attempt to change him back. As passions collide and blood is spilled, who will prosper in this eventful season?

As I previously mentioned, this season expands on the first in many excellent ways. The writing is as fresh and witty as ever, but the tone is more serious. This season shows maturity as Buffy experiences the tragic effects of falling in love with Angel and the consequences of it. The darkness of the season is also embodied in the characters of Spike and Drusilla. Their relationship is a twisted and perverse one that makes for a creepy watch. 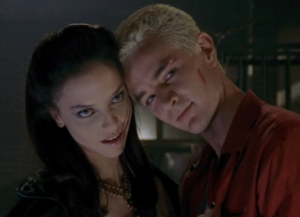 Spike is hotheaded and violent, Drusilla is childlike and doleful with a sinister streak. Their relationship calls to mind Bonnie and Clyde, in a dangerous vampire form. James Marsters and Juliet Landau make for inspired casting and imbue their roles with menace, dark humour and chills. Marsters makes Spike a dangerous enemy whilst imbuing him with a very dark sense of humour. Juliet Landau is perfectly cast as the fawning Drusilla, whose babbling and nursery rhymes belie her sadistic and twisted mind. This season has a dark and romantic atmosphere that keeps you hooked as each episode goes on, causing a correlation between the themes of love and death. The characters are growing up and we see the changes in them as they go through what life throws at them, with extra helpings of evil demons and fiends thrown in for good measure. Spike, Drusilla and Angel may take the honours of being the best villains, but there are plenty more foes that Buffy faces that are worth a mention. 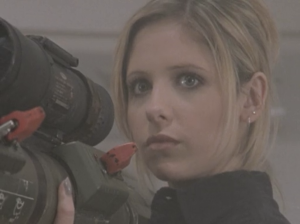 These include a robot disguised as a businessman who take a shine to Buffy’s mother, a terrifying demon that can only be seen by children and The Judge, a supposedly indestructible force that Buffy takes down with a rocket launcher in kick ass fashion. Emotions run high throughout Season 2 with Angel killing Jenny a particularly shocking and unexpected moment that has a grave outcome for an emotionally shattered Giles.

As with the last season, the acting is of the highest order. As Buffy, Sarah Michelle Gellar exudes maturity, strength and intensity that aid her in her battles against demons and her protection of her family and friends. She shows how Buffy is learning about life and the wounds it can inflict on you, especially when it comes to love. David Boreanaz nails the role of Angel, who reverts back to his menacing old self and wrecks havoc on Buffy and her friends. Gellar and Boreanaz have great chemistry together and their scenes together are filled with passion, devastation and connection.

Alyson Hannigan subtly portrays Willow’s blossoming confidence and resourcefulness as she begins a relationship with Oz, who is played with easy-going charm by Seth Green. Nicholas Brendon continues to play Xander with lovable wit whilst also revealing the hidden depths to his character and how much his friends mean to him. Charisma Carpenter manages to give Cordelia an ever-growing sympathy as she joins the gang in their tasks. Her relationship with Xander proves interesting because of the way Cordelia shrugs off popularity to be with him. Sure Cordelia still retains some of her vanity, but she’s definitely more relatable this season. Anthony Stewart Head carries on his impressive role as Giles, who develops a close bond with fellow teacher Jenny, only to have it tragically taken away from him. I liked how this season expanded on the character of Giles and showed various incidents that happened in his past that have made him the way he is now.

Darkly romantic, dramatic and witty, Buffy Season 2 delivers the goods that really have me wanting to watch Season 3 as soon as possible.