After the success of my Lost reviews, I decided to turn my attentions to another one of my favourite TV shows. This time it is the iconic Buffy the Vampire Slayer series. Created by Joss Whedon, Buffy went on to become a cult hit with its mix of humour, horror and action. Even now, Buffy ranks as one of the top TV shows I’ve ever seen, it just never seems to get old and I always find something new when I watch it again. I hope these reviews go down well with everyone. Be warned, spoilers will follow in this review.

Buffy Summers(Sarah Michelle Gellar) just wants to be a normal teenager. Kicked out of her old school in Los Angeles, she moves to the Californian town of Sunnydale to make a fresh start. There’s just one major hitch with Buffy, she is the Slayer. According to the prophecy “In every generation, there is a chosen one. She alone will stand against the vampires, the demons and the forces of darkness. She is the Slayer.” Buffy is well aware of this and wants to escape it, but it just so happens that Sunnydale is located on the Hellmouth, which means that all things evil are drawn to it. Try as she might, there is no escaping the prophecy. With help from new friends, the goofy but lovable Xander Harris(Nicholas Brendon) and sweet and shy computer geek Willow Rosenberg(Alyson Hannigan), Buffy reluctantly chooses to accept her duty and take down the forces of evil that threaten Sunnydale, all while surviving the traumas and dramas of high school, mainly by popular fashion plate Cordelia(Charisma Carpenter). Also aiding Buffy is Giles(Anthony Stewart Head), the stuffy Watcher and school librarian who trains Buffy and keeps an eye on her. Adding to the confusion in her life is the mysterious figure of Angel(David Boreanaz), who she falls for but realises his dark secret. Witty lines and scary thrills follow as the strong and lethal Buffy fights against the dark forces of vampires and demons, headed this season by an ancient vampire known as the Master, who wants to rise from the underground and feed on humans. This leads to a kick ass showdown between him and Buffy.

Basing a TV show off a movie that didn’t do that well was risky business, but Joss Whedon pulls it off amazingly with Buffy. He has crafted relatable characters, menacing villains and kick ass action that would lead the show to reaching seven seasons. Praise should be given to the sparky dialogue that populates this season. Taking aim at high school conventions and life or death moments, Buffy will have you laughing as well as frightened in equally effective measure. The mixing of high school drama and supernatural horror is an acutely observed one that complement one another. I mean as many people say, high school can be horror in more ways than one. This is certainly the case for the gorgeous Buffy and pals. 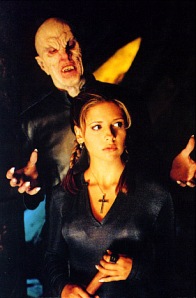 Also the supernatural forces that threaten Buffy are fun to watch, especially the creepy Master who sends shivers down the spine. I mean just listing some of the evils faced is enough to make you want to watch the show, such as savage students possessed by demonic hyenas, a demon who filters his way through the computer system and a seductive teacher who is actually a deadly Praying Mantis in disguise.

The acting in this show is definitely in need of praise. I can’t think of another actress to play Buffy except Sarah Michelle Gellar because of how great she is in the role. She encapsulates the sarcastic and self-assured persona of a teenage girl having to fight the forces of darkness whilst navigating her way through high school. Kick ass, sexy and feisty, she is an all out heroine who you really don’t want to mess with. 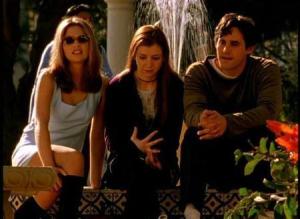 Gellar also shows depths to Buffy, and the way in which she has to obey the prophecy but at the same time just wants to live a normal life which in her case seems to be intangible due to her circumstances. Nicholas Brendon adds goofy charm to the role of Xander, who is often bumbling his way into disaster whilst trying to attract Buffy’s attention. Alyson Hannigan provides warmth and humour as the clever Willow, whose computer skills and knowledge often come in very handy when finding out who the enemy is. In the role of Giles, Anthony Stewart Head exudes authority and stuffy conservatism all whilst trying to help Buffy survive.

He really does have some excellent scenes in which he disagrees with Buffy’s tactics for taking out the enemy or commenting on her sarcasm towards him. Charisma Carpenter is great as the shallow Cordelia, who takes aim at Buffy and her friends but soon finds herself drawn to the group because of the strange occurrences in Sunnydale. David Boreanaz is effectively used as Angel, who becomes Buffy’s love interest. The twist of this romance is the fact that Angel is in fact a vampire, but also is cursed with a soul. This device is used well as we watch Buffy wrestle with her feelings for him, whilst knowing that he possesses great danger to others. This romance will later have a profound effect on the seasons after.

Buffy Season 1 may only be short, but it’s well worth the watch because of great performances, witty dialogue and chills a plenty. Watching this season again has got me super excited for season 2.