And here it is, my review of Lost’s final season. I have continued to be enthralled by this enigmatic series from the moment I watched it. Revisiting it has been a great experience, and hopefully this has translated into my reviews of the past seasons. So back to business with this review of the polarizing and highly controversial Season 6. Spoilers will follow in my review. 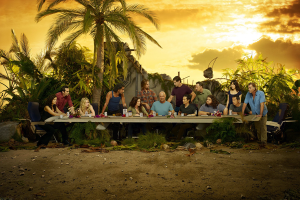 Last we saw of the characters was Jack(Matthew Fox) attempting to blow the survivors back into the correct time zone by detonating a hydrogen bomb which will place them back on the flight. We now see that they are back on the island once more after Juliet(Elizabeth Mitchell) caused the bomb to explode, preceded by a bright flashing light. Juliet succumbs to death in Sawyer’s(Josh Holloway) arms and Sawyer sinks into depression. 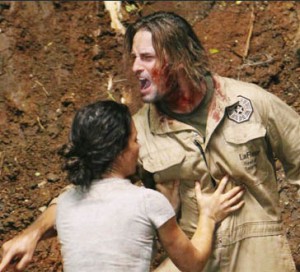 Meanwhile, after he got Ben(Michael Emerson) to kill Jacob, the person claiming to be Locke(Terry O’Quinn) revealed himself to be the ‘Man in Black’ or the smoke monster who is now stuck in the guise of the deceased Locke. He takes command over a small group of people in order to gain leadership and revenge. Sun(Yunjin Kim), Ben, Frank(Jeff Fahey) and Ilana(Zuleikha Robinson) try to navigate their way through the jungle to warn the others. With Sayid(Naveen Andrews) injured, Jack,Kate(Evangeline Lilly), Hurley(Jorge Garcia),Miles(Ken Leung) and Jin(Daniel Dae Kim) take him to the Temple, which is populated by a group of ‘The Others’, where he can be supposedly healed. Sayid dies but strangely comes back to life two hours later. But Sayid isn’t how he was originally, and he later switches to the dark side as a result. Kate later goes to find Sawyer with Jin, but the two become separated from each other. Jin soon encounters a familiar face in Claire(Emilie de Ravin) who was last seen wandering into the jungle after seeing a vision of her father in Season 4. 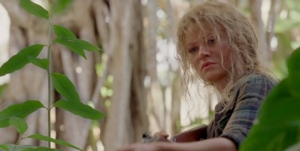 Claire has significantly changed from the vulnerable girl we last saw, adopting a harsh personality based on survival and instinct, very much like jungle dweller Rousseau before her. Jack is warned by the leader of the Man in Black’s plans to kill everyone and take over leadership of the island. But with friendships changing and loyalties shifting, can any of these characters survive what is to come? Prepare to be shocked and thrilled as Season 6 unravels with the reasons why the characters are on the island and the history behind it.

The first thing to comment on in this final season is the introduction of the flash sideways. Through this technique, we witness the characters living out what their lives could have been like if they hadn’t crashed on the island. These little snippets of alternate lives prove for interesting viewing to say the least. Many have said that the technique isn’t useful, but I think it does serve as a melancholy reminder of how drastic the survivor’s have changed since their first encounter with the mysterious island. Various scenarios include Locke being reunited with his beloved Helen, Sawyer as a cop and Kate escaping justice and meeting Claire. I admire the heightening of the themes of good and evil, and the cloud of confusion that comes from attempting to fathom who is on the right side. 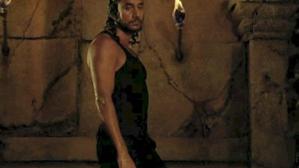 Various characters are afflicted by this, prominently Sawyer and Sayid. Effectively woven into this tapestry are themes of loyalty, friendship and distrust. The season does get quite complicated towards the end, but still elicits a strong emotional response from me. Having watched all of the seasons, there is a deep, emotional tie to these characters in their quest for answers.

The cast as always are impeccable and have become so intertwined with their characters emotions. Matthew Fox is reliable as Jack, whose pitted in this battle of good and evil because of conflicting beliefs and ideals. Terry O’Quinn is menace personified as the Man in Black taking the form of Locke, we watch how he influences the characters in his attempt to escape the island once and for all. Michael Emerson manages to reveal a strangely sensitive and vulnerable side to the normally traitorous Ben, whilst Jorge Garcia imbues Hurley with lovable charm and warm pathos. Josh Holloway is impeccable as Sawyer, whose character has deepened with every season. Naveen Andrews effectively portrays Sayid’s journey to the dark side but also his heroic salvation. Henry Ian Cusick adeptly plays Desmond and his humorous but resourceful demeanor. Daniel Dae Kim and Yunjin Kim are impressive as Jin and Sun, who are finally reunited after being apart for so long.Evangeline Lilly brings her familiar mix of strength and vulnerability to the role of Kate. Emilie de Ravin returns as Claire, and cleverly shows her regression to primal instinct and then her accepting humanity again as she remembers what happened before. Elizabeth Mitchell, despite only appearing briefly, adds sadness to Juliet as she courageously tries to save the island but succumbs to death in the arms of her beloved Sawyer. Ken Leung and Nestor Carbonell are used to great effect as the sarcastic Miles and the ageless Richard. Jeff Fahey gets some excellent one liners as pilot Frank. Zuleikha Robinson returns as Ilana, though it’s a shame that her character is killed off so early in the season and not developed well enough.

This season is full of heart wrenching moments from start to finish. The two that most affected me where Sayid’s heroic sacrifice and Sun and Jin’s death by drowning. As they occur within minutes of each, the emotional impact is all the more powerful as we watch the deaths of three popular characters. If you don’t find their deaths emotional, then you have a heart of stone. Sayid’s death is tragic because he finally finds redemption in sacrificing himself, Sun and Jin’s death is sad because of the various obstacles that they have overcome to be where they are now and how they die holding hands, symbolising their undying love for one another. No discussion of this season would be complete without mentioning the controversial ending. In it, we see all of the characters from many of the different seasons reunite in a church as they move onto the afterlife, whilst a highly emotional score plays in the background. I personally found the scene very evocative and heartfelt. 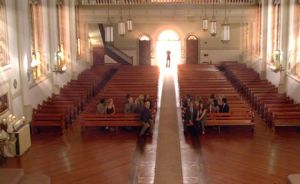 I know many will disagree with me, but I still can’t shake the ending. Many people thought that the ending basically implied that the characters were dead all along, but if you listen closely the whole story is explained by Jack’s father.

Emotional and interesting, the last season of Lost is not to be missed. Some may take certain issues with the series, but the characters are so well written that this is more than enough to get you through. I’m sad to finish watching this series, but fear not fellow bloggers as more television reviews will be coming your way very soon.