The Lord of the Rings: The Return of the King

Rounding out my marathon of the Lord of the Rings trilogy is the grand and unbeatable Return of the King. It has been great reviewing these outstanding films and I hope that the other bloggers have enjoyed it as well. Winner of a staggering 11 Oscars, including Best Picture, Peter Jackson once again creates a film of such beautiful and emotional scope. Focusing on Frodo as he reaches Mount Doom, Aragorn’s taking of kingship and earth shattering battles, Return of the King is a fantasy epic of the highest order that is certain to blow you away. 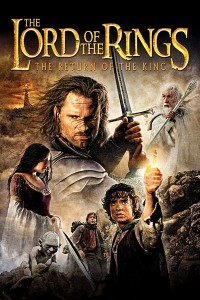 Frodo continues his quest to destroy the ring with Sam and the ever changeable Gollum, whose desire for the ring is growing more dangerous by the day. Day by day, Gollum conspires to drive the two friends apart in order to gain access to the ring. Meanwhile Aragorn claims the throne of Gondor and begins to raise an army of the dead to fight against the forces of Sauron that are quickly taking control over Middle Earth. Aided by friends, the time has come for Aragorn to fight and Frodo to prosper as he nears the end of his quest. Prepare for the epic spectacle of Return of the King, it will most certainly take your breath away.

If I could describe The Return of the King in one word it would be spellbinding. From absolutely stunning locations to fierce battles and the perils of various creatures, Peter Jackson never loses out attention for a single minute. He deservedly won the Best Director Oscar for his awe-inspiring and deft direction. By the end of the film, you feel so close to these characters and feel as if you’ve been on the epic journey with them right until the end. The smart screenplay is mainly the reason for this as the film nears its end, we get to see the impact the ring has on each of the characters within the narrative. As in the other films, the score is an evocative and dramatic listen that soars with emotional dexterity. While watching the film, I really didn’t want it end as it was just so involving for me. Moments in this film will forever be indelible in my mind. Some of these are Arwen’s vision of the future that persuades her to wait for Aragorn and armies rising just before battle as Aragorn, tears in his eyes utters “For Frodo”. As he says these words you understand the loyalty and friendship that is shared and the power of it.

The ensemble cast is a richly talented who have created indelible characters. Elijah Wood continues to impress as the stout-hearted Frodo, who is nearing the end of the journey whilst overcoming many obstacles. Ian McKellen is another highlight as Gandalf, while Viggo Mortensen gives one of the strongest performances as the returned king Aragorn. Sean Astin is still impressive as the good friend Sam, who has helped bring Frodo this far with his own will and determination. The scene of Frodo and Sam comforting one another, their faces dirty, their eyes red from crying but their spirits still strong, is an undeniably moving moment in a trilogy of memorable scenes. Andy Serkis is amazing as the demented Gollum, now almost completely consumed with the power of the ring and poisoning Frodo against those closest. With the power of CGI and Serkis embodying Gollum’s wiry movements to unnatural fashion, Gollum is a memorable masterwork.

Fleshing out the other members fighting with Aragorn are the reliable John Rhys-Davies and Orlando Bloom as Gimli and Legolas. Liv Tyler is moving as Arwen, who has renounced her immortality as a means of staying with her one true love Aragorn. Miranda Otto has an expanded role as Éowyn, here showing the mental and physical strength to fight in battle. Billy Boyd and Dominic Monaghan are still as plucky as ever as Pippin and Merry. Bernard Hill is very good as the brave King Théoden, while Cate Blanchett radiates ethereal beauty and deep wisdom as the elf Galadriel. Hugo Weaving and David Wenham reappear successfully as Elrond and Faramir. John Noble provides the interesting character of Denethor, a stand in ruler who is weak-willed and snake-like. Karl Urban rounds out the cast as the knight Éomer.

Stunningly mounted, emotionally gripping and all round magical, The Return of the King is all you could ask for in a fantasy movie and more.

46 thoughts on “The Lord of the Rings: The Return of the King”