Ideally cast and brimming with dark humour throughout, The Addams Family retains the dark edge of the original cartoons an 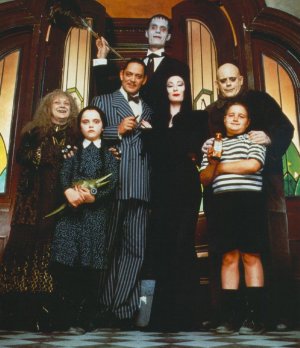 d incorporates some of the madcap moments from the original series. Focusing on a plot to extort the macabre clan out of money by an imposter posing as Uncle Fester, it is a devilish delight for all who watch.

The eponymous clan is a macabre extended family interested in all things dark and mysterious. They consist of the debonair Gomez and his morbidly elegant wife Morticia; their two mischievous children, Wednesday and Pugsley, old Grandmama; zombie like servant Lurch and disembodied hand Thing. For 25 years, Uncle Fester has been missing and Gomez is starting to suspect that his brother may truly be lost. Into the family’s delightfully ghoulish mansion comes Tully Alford, the lawyer who owes a debt to loan sharks. He wants Gomez to invest money as he knows he is worth a fortune, but the head of the family won’t budge. Whilst reporting back to the loan sharks, Abigail Craven and her brutish son Gordon, he notices that Gordon bears a striking resemblance to the long-lost Fester. Seeing the opportunity in this, they disguise him as Uncle Fester so he can infiltrate the Addams gold vault. Although he is welcomed back into the family, Wednesday is the one who begins to suspect that he is not really her Uncle. Gordon himself even comes to question whether he really is Fester as he feels a kinship towards the clan. Cue for ghoulish laughs, Gothic surroundings and the original kooky family.

The first thing to praise in the film is the overall visual look, capturing the gloomy atmosphere that the eponymous family enjoy so much. The mansion in which they live is cleverly constructed, consisting of long corridors, cobweb laden basements and spooky methods of transport. The lively music score perfectly compliments the macabre yet playful activities the family enjoys on a daily basis. One of the biggest assets of the picture is the script, that is laced with a dark humour and sinister joy. Morbidly humorous exchanges provide the most laughs such as when Morticia helps Fester unpack and finds cyanide. Her response “Fester, as if we’d run out”. It’s moments like this that keep the devilish film rolling on along with the many eccentric characters that abound.

The cast assembled for The Addams Family all fill their roles with comic glee and individuality. Raúl Juliá is suitably debonair and romantic as Gomez, he also has dark and lustful chemistry with Anjelica Huston. Huston embodies the role of Morticia, showing a loving mother and a cadaverous yet glamorous vamp, who can flirt like

mad when needed and is a dab hand at sinister one liners.  Christopher Lloyd seems born to play the role of Fester, and is particularly convincing as his character begins to wonder whether he is Fester after all. A young Christina Ricci perfectly plays Wednesday with a morbid and severe personality, whilst showing a twisted side to her as she experiments on her brother in startling ways. Jimmy Workman excellently plays of Ricci as Pugsley, who although many times is the one used in experiments, he also manages to repay the favour in his own ghoulish way. In the supporting cast, Dan Hedaya and Elizabeth Wilson stand out as scheming con artists with only money on the mind. Judith Malina also makes an impression as the ragamuffin Grandma, who brings a whole new meaning to the word home cooking.

Even if the plot about the imposter doesn’t interest you, it shouldn’t detract from the humorous exploits of the creepy family and the glee that arises from them. Laced with dark humour and brought to life by Barry Sonnenfeld, The Addams Family is creepy yet fun to watch.

18 thoughts on “The Addams Family”