An eerie, atmospheric and intelligent urban horror, Candyman drives to the heart of the meaning of fear and the haunting spectre of urban legends on the mind. Boasting bizarre yet stunning visuals, first-rate performances and a ghostly score by Philip Glass, Candyman is scary and memorable viewing for sure.

Helen Lyle is a Chicago graduate student who is completing a thesis on the nature of urban legends. She is married to a professor who is slimy and seems to have an eye on another girl. While conducting research with best friend Bernadette, she hears of Candyman. The urban legend says that he will appear behind you in a mirror if you say

his name five times, then he will cut you open with the hook he has for a right hand. Although curious about this legend, she is still skeptical about whether it is really true. As she continues to look into the story of Candyman, she discovers he was the artistic son of a slave who fell in love with a white woman. When the girl’s father found out that his daughter was with child, he summoned a lynch mob to attack him. He had his right hand cut off and the mob covered him in honey from an apiary, causing bees to sting him to death. The mob burned him on a pyre and his ashes were scattered over the gang-ridden Cabrini-Green housing project. Helen and Bernadette investigate the project and find the people certainly believe in the title character, especially after a girl was murdered in one of the apartments. Still skeptical about it, Helen tries out the theory of calling his name. At first nothing happens, Helen thinks it is just a story used to terrify the residents. Yet when she has her own encounter with Candyman, her world begins to crumble as she realises she has conjured something that she can’t take back and will spell out violent and brutal consequences for her.

Credit must go to Bernard Rose, who directs this imaginative and compelling film with daring visual flair and shocks a plenty. The screenplay excellently captures the duplicitous nature of urban legends. We’ve all been told stories about alleged monst

ers under the bed or the bogeyman, but with Candyman they are fashioned into a mature and adult tale that focuses on the fear surrounding them. We’ve all doubted the existence of such things, but are we being too scared to actually believe the power of urban legends? The score by Philip Glass is a haunting and sinister listen, mainly usually mournful chorus voices and synthesizers to add to the already creepy atmosphere that becomes even more scary after Candyman’s arrival. Virginia Madsen is emotionally effective and haunting as Helen, who although intelligent and resilient becomes increasingly confused as she realises the extent of her careless actions. Candyman only exists because of her, without her the story wouldn’t flow. She is the driving force within the narrative as it unravels. Tony Todd as the eponymous spirit, adds menacing and strangely romantic qualities to the vengeful hook-handed monster, perfectly utilizing his deep voice and height to scare the unwitting Helen and the audience. This is most apparent in the spine-chilling meeting between the two in a parking lot. He emerges calling her name in a deep voice and speaks of making her his victim to prove he exists, in a perversely 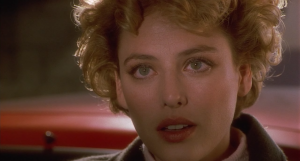 romantic way. Helen is hypnotised by his presence, captured in luminous close-up as murals of the spectre flash before her eyes. There is an almost gothic romanticism apparent in the relationship between the two that is reminiscent of Dracula, he’s out for revenge and sees her as the victim of choice. She is entranced and later horrified as she is implicated in suspicious events because of him. The film taps into the share cultural fear of the unknown presence that suddenly takes hold. The gore in Candyman is shocking, but never gratuitous as we know why Candyman does it and his tragic back story.

Candyman itself is a sinister film, with added chills derived by the visuals. Murals and swarms of bees feature heavily and are excellently edited into scenes in which Helen encounters Candyman. We understand the legend at the same time as Helen, showing that the screenplay has revealed subtle insights that at first appear trivial and then take on a shocking new meaning. If it’s a shocking but never dumbed down story of palpable fear, then Candyman is right up your street. Also, you may think twice about saying his name five times to a mirror after watching it.