Synopsis: The continuing saga of the Corleone crime family. The film centres on the business of Michael Corleone, as he becomes the new Don and shown in flashback is the rise to power of his father before him. The film couples the stories together to show Michael’s dilemmas and doubt and his father’s gradual ascent to becoming the all-powerful Don. 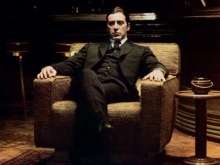 Many people thought that it was going to be hard to surpass a masterpiece like The Godfather, but all naysayers were silenced when this sequel was released and many declared it equal to its iconic prequel. Rarely has a sequel been quite as well received as The Godfather Part II. It also doubled the first film’s Oscar wins by collecting six including Best Picture, the film remained the only sequel to win this award until Lord of the rings: The Return of the King won in 2003.  Whilst the first film is justly seen as the best, I personally think that Part II is just as good and actually reveals more on the history of the Corleone family and how it became an organized crime family.

Whilst the first film is well-known for the iconic scenes that abound, Part II has some justly famous moments that linger long in the memory.  The main thing that I like about the film is the cross cutting between Michael’s eventual downfall and the ascent of his father, this gives the film a profound and darker quality as we witness two stories running parallel to each other. Another aspect that makes the film intriguing is its expansion on certain characters, most notably Fredo, Connie and Kay, whose roles become more important and significant to this epic ongoing saga of the Corleone family.

One specific scene that has resonance with me is the flashback scene in which a nine-year-old Vito arrives in New York an orphan after his mother was murdered by the local Don.After escaping Sicily with the help from the local peasants, Vito climbs aboard a ship and sails for freedom. As you know what he later becomes it is interesting to see him has a young child and how certain aspects of his early life influenced his life in later stages.  His wide-eyed look at the Statue of Liberty is significant as I can relate to the experience of moving to a new place and not knowing anyone or what is going to happen.  The music in the background adds to the feeling of being in a foreign place and the journey endured for it.  The cinematography is outstanding as the sepia tones clearly highlight the period feel of the film and give it a nostalgic edge.

The rise of the Don

The other scene in my opinion is the turning point of the young Vito, here brilliantly portrayed by a young Robert De Niro, is when after witnessing the power wielded by Don Fanucci and after he tries to extort money from him, he secretly follows him and kills him. People may think that it sounds shocking but Vito doesn’t kill him for the fun of it, he kills him because of the things he has done to other people close to Vito and to Vito himself. The masterful sequence starts with the quiet Vito scaling the roofs of various buildings like a predator silently stalking its prey, following Fanucci as he makes his way through the parade, people falling on their feet to show respect as they know what consequences can happen if they get on the wrong side of him.  Vito then enters Fanucci’s apartment and silently waits for him to appear armed with a gun Clemenza told him to mind for him. After Fanucci enters his apartment he sees Vito and doesn’t expect anything, but then Vito emerges and shoots Fanucci in the chest, his gun silenced by a towel and the celebrations outside. He then retrieves money from him and destroys evidence of the gun. What I find so interesting in the scene is the gradual transformation of Vito who realises the importance of p

ower and honour and how it can be used. By killing Fanucci he takes over as the more respected Don of the neighbourhood who by his own admission “knows how to repay a favour”, but who everyone knows not to cross with their lives. I like the way in which Coppola captures the two sides of the new Don as he is seen after killing Fanucci, calmly going back to see his wife and young children on the steps of their apartment. Coppola also helps elaborate on the central themes in the movie as Vito tells a baby Michael that he loves him, further foreshadowing the feeling of honour. It is also a sly reference to the fact that Michael in the future becomes completely different to what he originally was.

The most lasting moment of the film comes at the very end of it. This moment is haunting as we see Michael, older than he really is sitting outside on a chair with an expressionless look on his face. In my opinion he has realised what it means to be the Don and that he is beyond

redemption for the things he has done.  Even though Michael is someone who has done bad things, I still have some sympathy with him, as I don’t see him as a villain but more of tragic hero.

As with the first movie, Part II has an exceptionally good cast. Pacino again delivers an outstanding performance, but the person who stood out for me was Cazale as his role as Fredo is expanded on. This time he gets more of a story as he begins to resent Michael for being one of his father’s favourite kids. This ultimately leads to Fredo’s downfall as he goes against the family.  Diane Keaton is good a

s well, her character of Kay now becoming embittered and tired of her husband’s lies. The scene in which she tells Michael that she has aborted her baby and he viciously strikes her is very effective; the acting by Pacino and Keaton is amazing. Pacino’s eyes say everything without him speaking as they begin to bulge with anger at Kay’s confession.

The other member of the cast that I thought did a fantastic job was De Niro as the young Vito. It must have been a hard act to follow on from the pivotal and extremely memorable Brando, but De Niro gives a revealing quality to his performance as the man before he was the Don. The uncanny likeness between De Niro and Brando is what makes the performance so good. Talia Shire reprises her role as Connie, but her character has significantly changed morphing from down-trodden wife to loose, hard-drinking girl who has had many loveless and empty marriages. Shire is great as Connie and brings a rebellious quality to her character as she constantly tries to get and Michael and get money off him.

In my opinion, Part II is equally as good as the first part. Part II is more profound and revelatory than its predecessor, tracing the origins of one of cinema’s most memorable families. In my view, Part II achieved a rare feat; it is a sequel that will be remembered as more than just the second part of a series but as a cinematic achievement.

15 thoughts on “The Godfather Part II”